Arrival and accommodation in Masseria

This route, about 50 kilometers long, is certainly one of the most evocative itineraries of the Valle d’Itria: we will be immersed in nature among olive trees, trulli and wonderful landscapes that are unique in the world. These are the real ingredients of this cycling experience.

The first part of the route, characterized by a panorama of ancient olive trees, leads to the town of Coreggia. Along the “Panoramica” of Monopoli, a small climb of about 5 kilometers, it is possible to enjoy a wonderful view between the intense blue of the sea and an expanse of olive trees that stretches from the coast to the hills of the Murgia. At the end of the slight slope you will enter the district of Monopoli, bounded by dry stone walls and Trulli, and from there reach Alberobello, “capital of the trulli and UNESCO world heritage”.

You will be surprised by the peculiarity of the houses of Alberobello: you will have the opportunity to visit the quaint streets of the village, full of souvenir shops and dining options where you can taste the local delicacies, allowing yourself a relaxing lunch break.
After lunch you will cycle for about 20 kilometers along the districts of Valle d’Itria and then return to Masseria Santa Teresa. 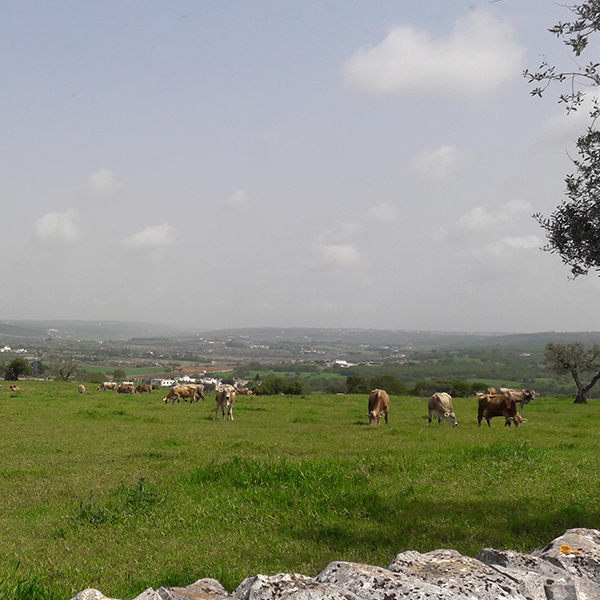 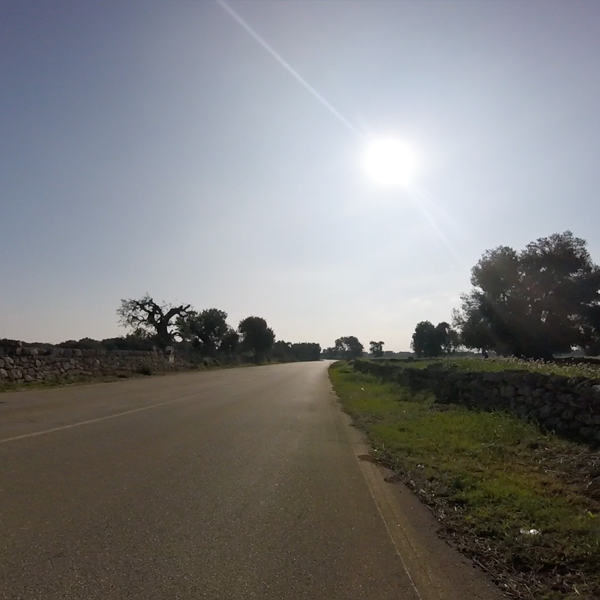 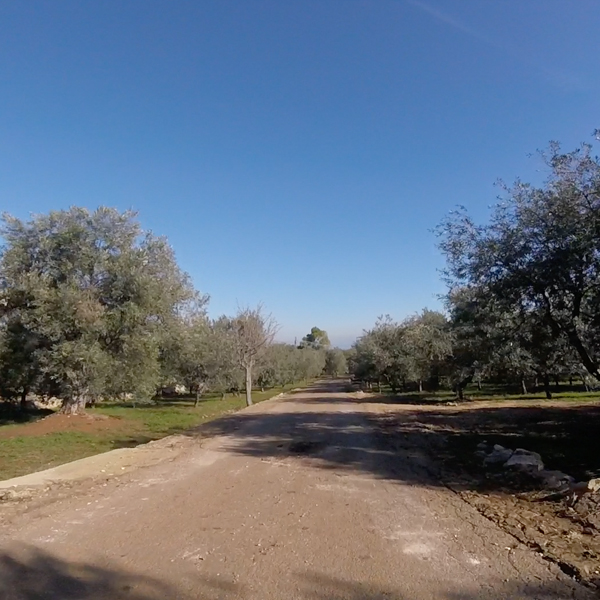 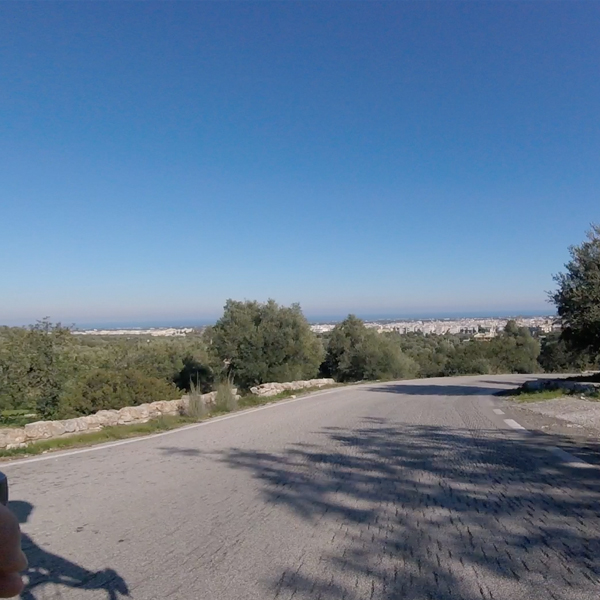 This itinerary, about 50 kilometers long, will lead you to the historic centers of Castellana Grotte and Conversano, and ends in the wonderful town of Polignano a Mare.

Traveling 8 kilometers we will arrive in Monopoli and you will visit its historical center of early medieval origin, superimposed on the remains of a fortified Messapian settlement already in the 5th century BC.

You will cross the high perimeter walls, to discover its architecture, until you reach the suggestive “Giuseppe Garibaldi” square, full of places where you can have a snack.

After enjoying the stop and the delights of Monopoli you will continue towards Polignano a Mare, one of the most fascinating points of Puglia, a village overlooking the cliffs, as well as a point of attraction for fans of the “Red Bull Cliff Diving World Series”, and birthplace of the famous Domenico Modugno, known all over the world for the song “Volare”.

Once you enter the old city you can admire the typical architectural features and the narrow streets that lead to the characteristic panoramic balconies.

In the beautiful Piazza you can take the opportunity to have a coffee break.

You will get back in the saddle and after about 5 kilometers you will arrive in San Vito, a small port of local fishermen and continuing along the coast you will return to Masseria Santa Teresa. 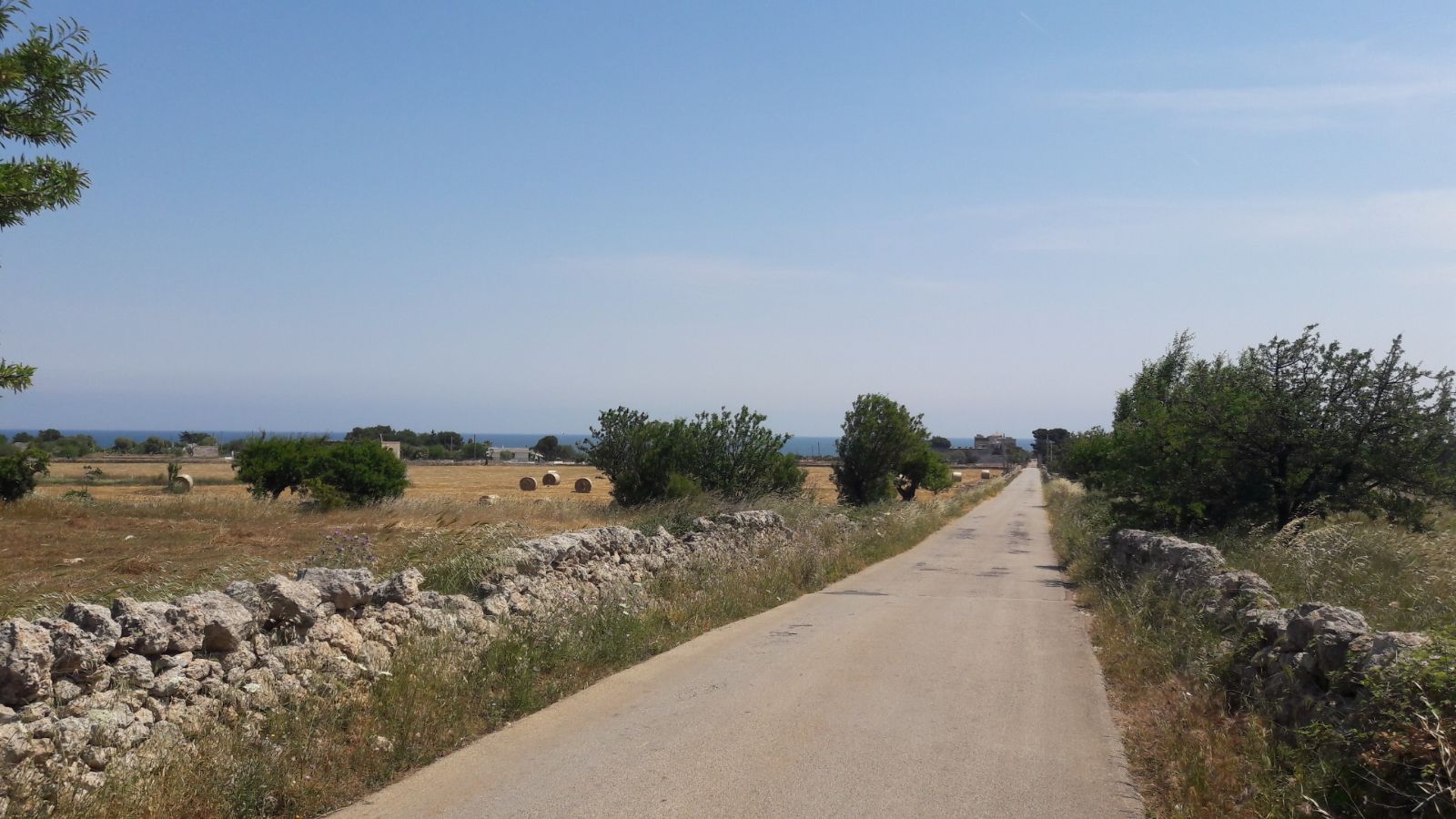 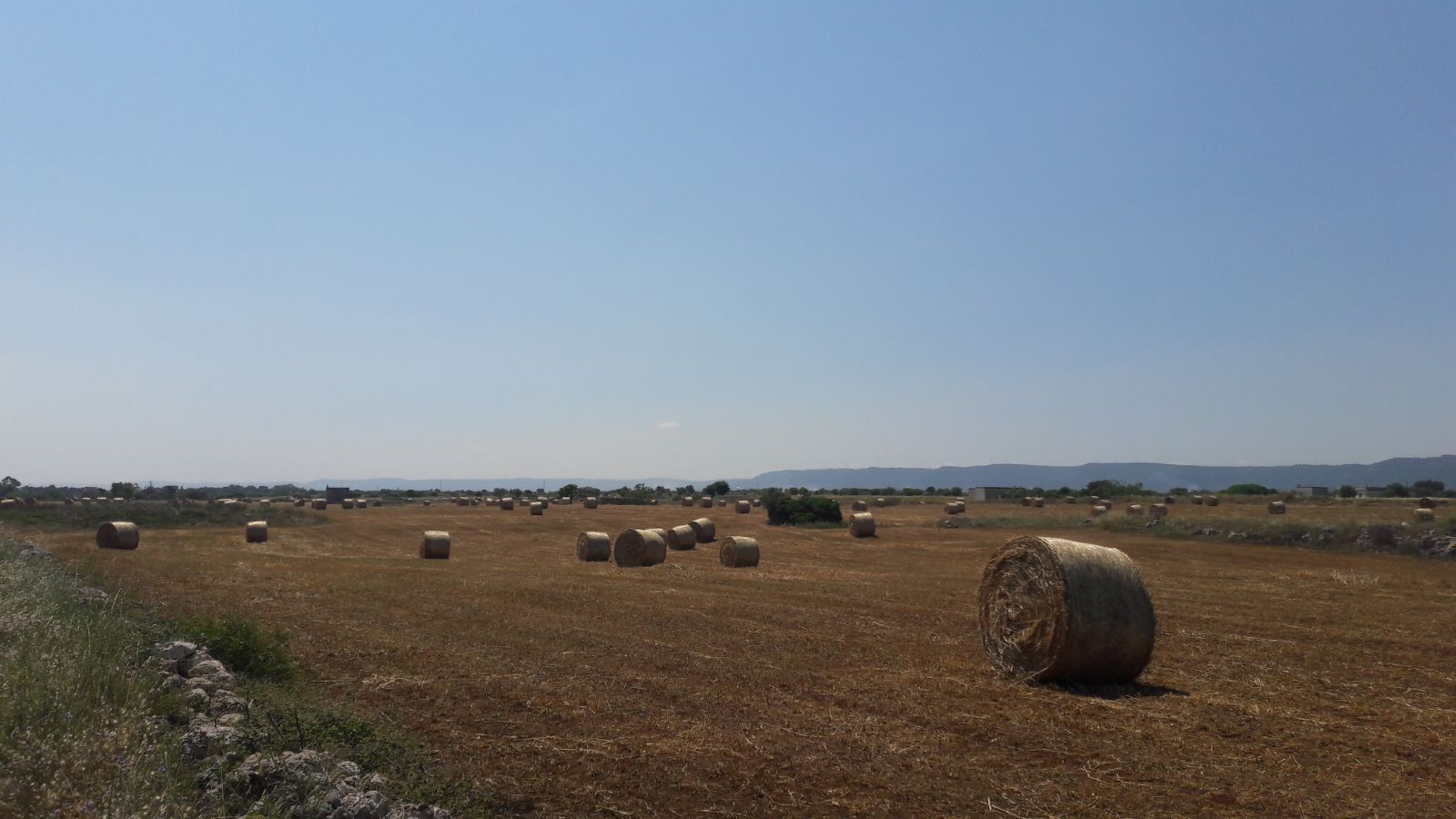 This itinerary, about 50 kilometers long, will lead us to the discovery of the typical colors and scents of Puglia …. the Adriatic Sea will be the frame.

You will travel for about 12 kilometers by road to reach the hamlet of Capitolo, a tourist and seaside area.

Pedaling along the coast you will head towards the excavations of Egnazia, one of the most interesting archaeological sites in Puglia, a few kilometers from Savelletri di Fasano, which interested parties will have the opportunity to visit.

At the end of the stop, continuing for a few kilometers, you will head towards Savelletri, a fraction of the municipality of Fasano, characterized by sand and cliffs, known mainly for its characteristic marina and for the presence of ancient buildings on the cliff, near the sea, called “White Houses”.

Following the sea, and heading towards the internal roads called “contrade di Monopoli” rich in dry stone walls and olive groves, after about 20 kilometers, you will return to the Masseria. 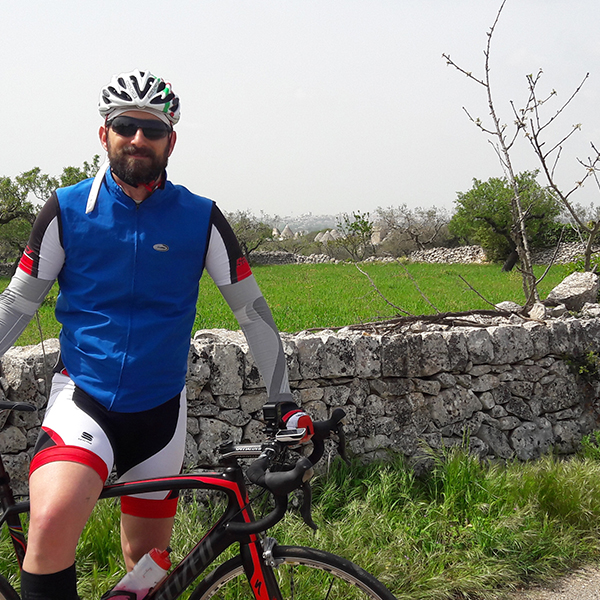 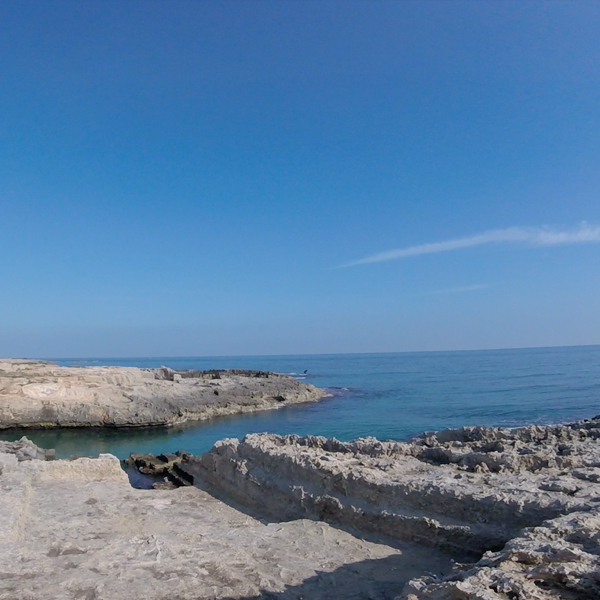 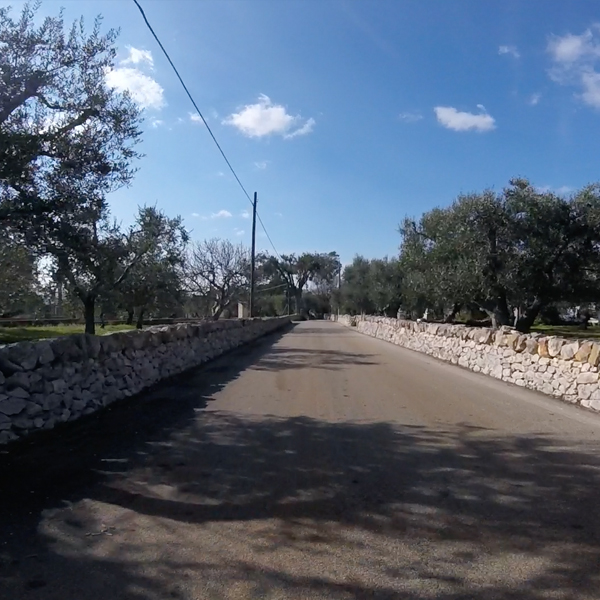 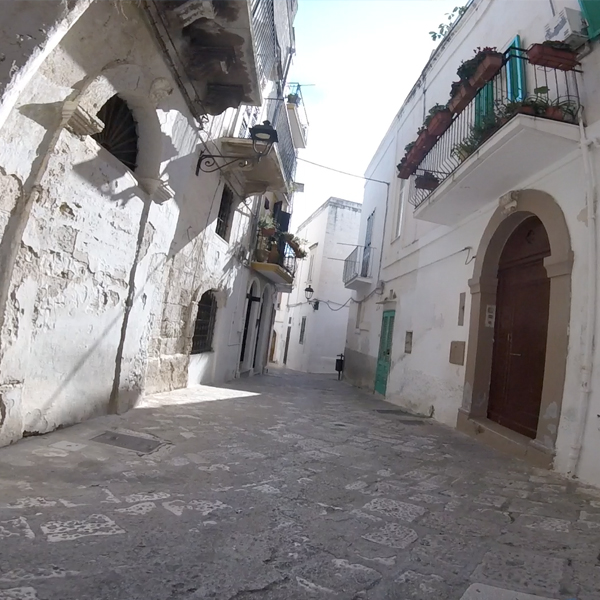 After the breakfast, it’s time to check out.

In thanking you for having chosen us and we wish you a good return home.

Have a good trip and we hope to see you next time.

N.B. we guarantee the coverage of routes for a door weighing up to 80kg. Any different condition will affect battery life.

On arrival day you will be welcomed by the staff of the Masseria. After the accommodation in the room, a representative of Apulia on bike will meet you in the hall to deliver the accessories (maps, GPS etc.) to show you more closely the characteristics of the tours.

N.B. The organization could make changes to this itineraries

Customers will have a 24-hour phone number to contact in case of need. Depending on the problem, the assistant will indicate the nearest bike workshop or suggestions to solve the problem or reach the structure more easily. Only in exceptional cases will it be able to intervene directly to rescue customers.

The stages are three, of a length between 40 and 60km, without particular differences in height, at most with some funny ups and downs, pedaling along the Apulian districts turns to the discovery of the architectural beauties typical of our land and of breathtaking landscapes capable of give moments of absolute leisure and relaxation. The tour is for everyone who has a minimum of cycling training.